Under the guise of Andrew Mitchell’s Second Act this incarnation was perhaps the least effective version of the band, coming as it did at the end of Andy, Neil  and Austen’s flirtation with the blues in the Spring of 1988 and the guys were attempting to find another direction . The original line up had an additional keyboard player Richard Johnson as well as Neil. Paul Williams on Bass and Rob Robinson on Drums.  Although quite a few new songs were written during this short lived amalgam. Only  Two demos were recorded with this version of the band so didn’t spawn any releasable recordings. The most notable event from the band’s point of view was the brief period in which rare groove legend (from his days with Cymande) Sam Kelly  joined the band replacing Rob, though somewhat gingerly and work began on the their very first full length album Less is More like the previous EP it was released on the band’s own label. It also featured newly installed bass player 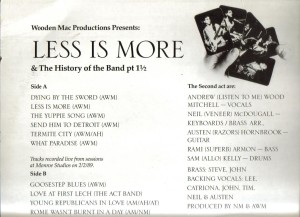 Rami Ramon .  Sam restored the direction and energy  that had somewhat dissipated in the previous year but by the end of 1989 had had enough so put his friend Steve Laffy forward and after the guys had auditioned a few other candidates  was asked to join what would ultimately be the final line-up. By this point the name had already reverted to The AM Band again.