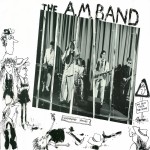 Originally titled “Strange Attractor” this is the Second full length album recorded by The final line up of the band during their most active period touring. A concept album, it was based on the  band’s new found interest in Chaos Theory.  Later this was thought too pretentious and based on the wonderful illustration of  Jude Evans they chose to rename the album.

The original live sessions were recorded on Stage Two at Thorn EMI Elstree Film Studios in 1989 and completed in Neil’s loft studio in Potters Bar.

In addition to the regular band of Andy, Austen, John, Neil and Rami the recordings also featured performances from the legendary drummer from the rare groove giant Cymande   Sam Kelly on Four Tracks after which he left the band and Steve Laffey replaced him on the sessions.  Also Lea Andrews; Catriona McDougall and Jo Payne on backgrounds and the first appearance on Am Band recordings of Stewart Curtis and Dave Land on Sax and Trumpet.