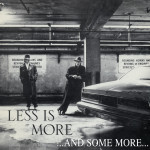 Less is More and Some More  –  Featuring the original and previously unreleased re mastered mixes of the  band’s debut album released in 1989  Less is More, The 1987 Good Earth EP and singles Young Republicans in Love and Ode to the New Year and some other tracks recorded in the Wooden Mac period.

Featuring the line up from the days of the Act Band, Wooden Mac/The AM Blues Band and The Second version of Andrew Mitchell’s Second Act.